Cannabis card system could decriminalise the drug and make possession legal for up to 3.5million Britons who use the drug to treat medical conditions such as multiple sclerosis and cancer.

Two years on from the legalisation of medical cannabis in the UK, British medical cannabis patients will have immunity from prosecution, as police chief says: “No one wants to see a patient in custody.”

It will identify the holder as a “registered medical cannabis patient” and officers say it will give them a justification for not arresting someone in possession of the drug. 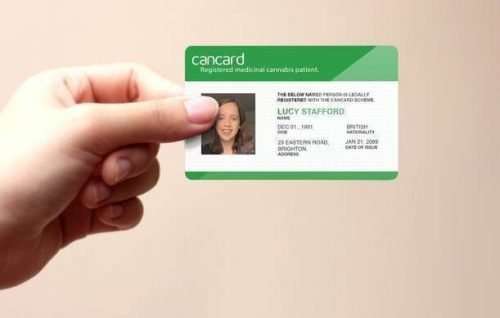 The ‘Cancard’, as shown, is a holographic ID card. find out about this on the cancard website, to obtain the card, the following conditions must be met: the patient must have a diagnosis from their GP that is being prescribed privately, have tried two different forms of medication or have discussed and discounted with their GP these options due to unwanted side effects or dependence concerns, are unable to afford a private prescription, are required to possess a small amount of cannabis to manage their symptoms, and are at risk of criminalisation.

CBD is classified as a “food supplement” in many countries. This means that when taking it, you are not actually ingesting a form of what is considered to be a drug, but rather, you are taking a natural supplement.

To avoid any confusion in this The Botanical Garden do not sell Medical Marijuana.

While every country has laws dictating the use of medical marijuana, more than two thirds of U.S. states and the District of Columbia have actually legalised it for medical treatments and more countries are set to do the same. While most people are using marijuana, the FDA has only approved it for treatment of two rare and severe forms of epilepsy,

The UK is still researching and investigating this, researchers need a special license to study it.

However the Cancard in our opinion is welcomed to govern the medical use of Marijuana.

The marijuana plant contains more than 100 different chemicals called cannabinoids. Each one has effects the body differently. Delta-9-tetrahydrocannabinol (THC) and cannabidiol (CBD) are the main chemicals used in medicine. THC also produces the “high” people feel when they smoke marijuana or ingest foods containing it.

CBD or Cannabis Oil as it is sometimes known, goes thorough a process to extract the cannabinoids via critical co2 extraction, this means that THC the component that gets you ‘High’ is minimal.

UK Law requires that oil should contain less than 0.02 THC trace content, The Botanical Garden supply CBD oil which is tested for purity of ingredients by labs to ensure this is the case, before sale to the general public.

Read here about the difference between medical cannabis and CBD

The Botanical Garden started as a quest to put holistic complimentary products based on the latest research and standardised processing methods within reach of people seeking healthier lifestyles whilst navigating the FDA.

This website uses cookies to improve your experience while you navigate through the website. Out of these, the cookies that are categorized as necessary are stored on your browser as they are essential for the working of basic functionalities of the website. We also use third-party cookies that help us analyze and understand how you use this website. These cookies will be stored in your browser only with your consent. You also have the option to opt-out of these cookies. But opting out of some of these cookies may affect your browsing experience.
Necessary Always Enabled
Necessary cookies are absolutely essential for the website to function properly. This category only includes cookies that ensures basic functionalities and security features of the website. These cookies do not store any personal information.
Non-necessary
Any cookies that may not be particularly necessary for the website to function and is used specifically to collect user personal data via analytics, ads, other embedded contents are termed as non-necessary cookies. It is mandatory to procure user consent prior to running these cookies on your website.
SAVE & ACCEPT
Login with Facebook Login with Google